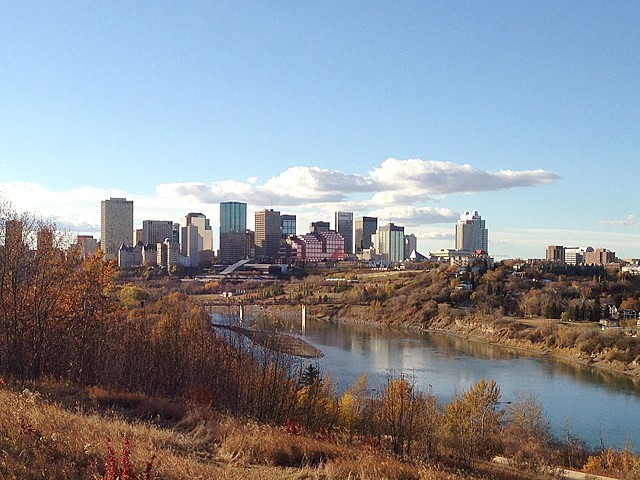 Strathearn is a roughly triangular shaped residential neighbourhood in south central Edmonton, Alberta, Canada. Most of the development in Strathearn dates to the 1940s and 1950s.

Part of the area of Strathearn was annexed by the City of Strathcona in 1907, and became part of the City of Edmonton when Strathcona amalgamated with Edmonton in 1912. The name Strahearn, which is Scottish Gaelic for "the valley of the river Earn", or "the valley of the Irish", has been used in Edmonton since 1912[6] and is likely a reference to the Governor General of the day, Prince Arthur, Duke of Connaught and Strathearn.[7] Large lots were subdivided during this period but only a few scattered houses were actually constructed. After World War IIEdmonton's city planners replotted the area and development began in earnest. Most of the structures in the neighbourhood date from 1948 to 1954. Extension of Connors Road to the Bonnie Doon Traffic Circle in the early 1960s clearly defined the neighbourhood's boundary with Bonnie Doon.

The most common type of residence in Strathearn, according to the 2005 municipal census, is the single-family dwelling. Single-family dwellings account for just under half (44%) of all the residences in the neighbourhood. Another one in three (36%) are rented apartments in low-rise buildings with fewer than five stories. One in five (20%) are rented apartments in high-rise buildings with five or more stories. In total, two out of three residences (66%) are rented.[10]

Most elementary-aged students living in Strathearn attend the nearby Holyrood or Rutherford schools. Strathearn Elementary/Junior School was a fixture in the neighbourhood from the early 1950s until 2005, when the Edmonton Public School Board closed it, citing declining enrollment.[11] In September 2006, the École publique Gabrielle-Roy, a francophone school run by the Conseil scolaire Centre-Nord, opened in the building that had housed Strathearn School.[12]

Strathearn residents have a variety of transportation options in addition to the car. Downtown and services and institutions in adjacent neighbourhoods and at Bonnie Doon Mall are within walking distance. Cyclists have access to a large portion of central Edmonton plus the network of trails in the river valley system. The neighbourhood is served by bus routes on Connors Road, 95 Avenue, 85 Street and 92 Street.

In December 2009 Edmonton City Council approved a southeast LRT alignment that would run through Strathearn on Connors Road, 95 Avenue and 85 Street.[13]